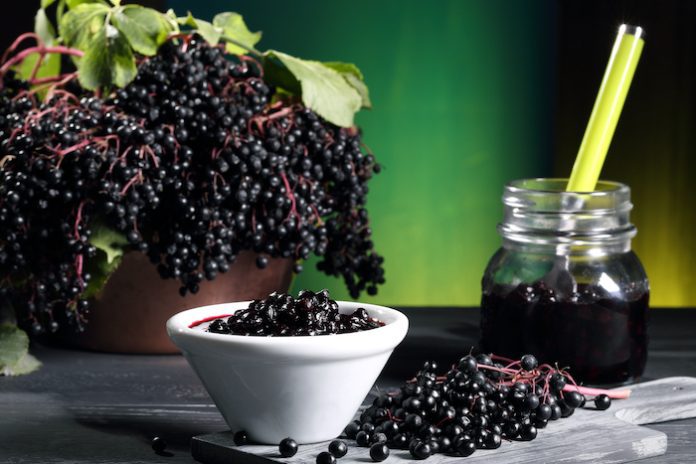 With cold and flu season on the horizon, we may have a natural way to stop them before they start. Recent studies show that Elderberry’s ability to reduce the duration and severity of colds and influenza may be even more powerful than once thought. Now we’re also finding out that elderberry may prevent our getting infected with the cold or flu in the first place.

A recent paper presented at the 21st Annual Integrative Medicine Conference is pointing in that direction. A research team in Brisbane, Australia found that by taking doses of elderberry extract while in the presence of colds and influenza, we may cut our risk of infection in half.

The study investigated the potential of elderberry for keeping air travelers safe from illness, and focused on 312 subjects. All were economy class passengers, flying from Australia to an overseas destination. While 154 of the test subjects received a placebo, the remaining 158 were given a membrane-filtered elderberry extract made from the Haschberg variety of the European black elderberry (Sambucus nigra L.), a proprietary formula created by Iprona AG, an Italian company. Cold episodes, cold duration and symptoms were recorded in a daily diary, and all the participants completed surveys before, during and after travel.

As the study ’s lead author, Associate Professor Evelin Tiralongo, of Griffith University, noted, those in the elderberry group experienced half the rate of cold and influenza infection as did the placebo group. Symptoms among the elderberry participants were not only less severe, the illness only lasted two thirds as long as it did for the placebo participants.

The risk of infection from colds and flu is in part due to how easily these diseases spread: droplets ejected during coughs and sneezes can travel many feet from the infected person. But cold and flu viruses can also survive on surfaces for considerable amounts of time. If in a cool and relatively dry environment, the viruses can live for as long as 24 hours, according to a 2008 study. And research conducted in 2007 found that those cool and low humidity environments often found in today’s air conditioned workplaces were indeed optimal for the survival and transmission of cold and flu.

Elderberry may help counteract this, however: a 2011 study conducted on an elderberry extract called Rubini (BerryPharma AG) found that the membrane-filtered extract inhibited the replication of strains of the Influenza A and Influenza B viruses. Moreover, the trial’s researchers found that the elderberry extract also killed the bacteria that caused upper respiratory infections.

We’ve known for decades that an elderberry extract could stop some strains of influenza from replicating. In 1995, a study found that it was effective against the Shangdong, Beijing, Texas and Singapore subgroups of Influenza A; and the Panama, Yamagata and Ann Arbor subgroups of Influenza B. And research conducted and published in 2009 reported that elderberry extract was so effective at blocking the replication of cold and influenza viruses that it compared favorably with some prescription drugs.

The locus of the elderberry’s therapeutic power lies in a group of plant metabolites contained within the fruit. Called anthocyanins, these powerful substances also give elderberries their nearly black color. So the next time you look at a cluster of elderberries, or notice the uniquely dark shade of elderberry extract, bear in mind that you’re looking at far more than an interesting natural ingredient, but a proven cold- and flu-fighting wonder.

Carl Thompson has been a freelance health and medical journalist for more than three decades. He specializes in natural alternatives to the synthetic products of the pharmaceutical industry, and is a research writer for IPRONA, an Italian company that produces standardized berry extracts for healthier nutrition. His work has appeared widely in both consumer and professional health trade publications internationally. His most recent book is “Inflammation: A Closer Look at What Drug Companies Do Not Want You to Know,” about a drug-free approach to managing arthritis and other inflammatory disorders. Follow him on twitter at @theberryroom.

Transform Your Health in 2022 With These Five Sustainable Lifestyle Practices