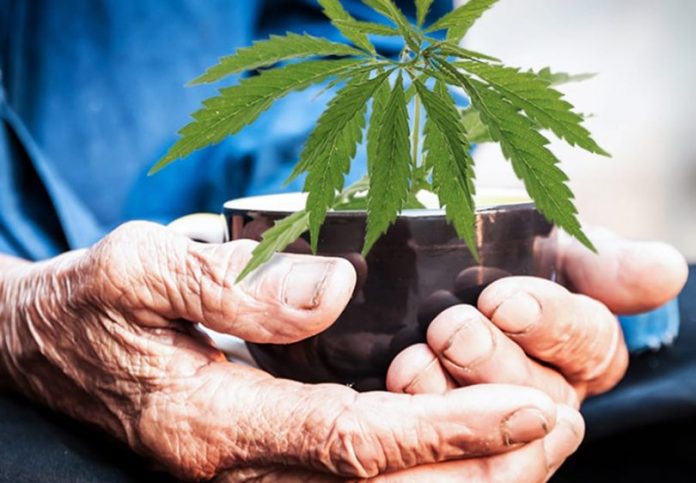 Although there isn’t any concrete evidence that Alzheimer’s disease can be prevented, stopped, slowed or reversed, there are many studies that prove cannabis can help manage some of the more typical behavioral symptoms like agitation and aggression. There are numerous studies that also show potential in preventing brain cell death with cannabis use.

That being said, the potential of cannabis that’s already been observed can’t be neglected. Let’s take a closer look at how cannabis can help patients deal with Alzheimer’s disease.

Let’s start from the beginning. Cannabis is a plant mostly known for its mind-altering effects, but that’s about to be changed. The more we research this plant, the more we realize that its recreational use is only one small side of what it can offer.

Cannabis is made up from two main components known as THC (Tetrahydrocannabinol) and CBD (Cannabidiol). THC has psychoactive characteristics whereas CBD is non-psychoactive, making it much more available and easier to be bought because it’s legal in more states than THC.

Despite the fact that they have different effects on the human mind, they both have almost the same health benefits – especially when it comes to seniors. Did you know that seniors are the fastest-growing group of cannabis users in the US? We’ll explain why in a minute.

How Does Cannabis Affect the Brain?

Our body has a network of cell receptors called the endocannabinoid system that is regulating different bodily functions. When they come in contact with the cannabinoids in cannabis, they change the release of neurochemicals in the brain. In other words, the brain cells start to communicate with each other in a different way.

The result is the body using more of its cannabinoids for the same processes. This, in turn, affects our appetite, mood, memory, pain, and learning (in a positive way).

How Can Cannabis Help with Alzheimer’s and Dementia?

One of the main reasons Alzheimer’s patients lose their mental abilities is due to piled up plaque that causes inflammation and neuron cell death. This is exactly where THC comes to play.

Tetrahydrocannabinol is known to reduce amyloid protein buildup and cell damage related to the disease. It can’t stop the process, but it can help patients to better deal with it. That’s why THC is more effective in the early stages of Alzheimer’s disease. Its ability to stimulate the brain’s natural endocannabinoids helps prevent cell death.

Another way cannabis helps with Alzheimer’s disease is by managing the symptoms of dementia, such as aggression and agitation. It can also help with <a href=”https://loudcloudhealth.com/depression-statistics/”>depression</a> that might appear in the early stages of learning about the disease. Cannabis calms the body and mind in a very natural way, therefore helping the patient cope better with this new information.

Several studies that were presented at Neuroscience 2018 showed that cannabis can have a positive effect on treating mice with Alzheimer’s disease. According to the findings, cannabis was able to improve their memory and reduce their neuronal loss, opening the door for a new way of searching for Alzheimer’s disease therapy.

One study by the Salk Institute discovered that THC can help reverse the buildup of harmful amyloid plaques in the brain. In turn, this helped with the neurodegeneration happening because of the death of brain cells. They also confirmed that THC can reduce inflammation.

Another study by researchers in Israel confirmed that the group of Alzheimer’s patients who were treated with THC showed a significant reduction in dementia symptoms. The research suggests cannabis treatment is a “safe and promising option” for reducing Alzheimer’s symptoms.

Is Cannabis the Right Treatment for You?

As you can see, medicine is on the side of cannabis. Although is still too early to draw the final conclusion, the evidence points to a new way of approaching this terrible disease. Cannabis is still illegal in most parts of the world so research is going slow, but with time, we should be able to have more access and with that more knowledge.

If you are suffering from Alzheimer’s disease or you know someone who is going through it, and you are searching for alternative solutions, cannabis could be the right treatment for you. Consult your doctor to learn about your options and better inform yourself. Cannabis can interact with the medications you are already taking, so you should always ask for professional help before you go shopping for cannabis.

How Long Are Medical Records Kept In Pennsylvania?

Asbestos and Children: How To Avoid Exposure